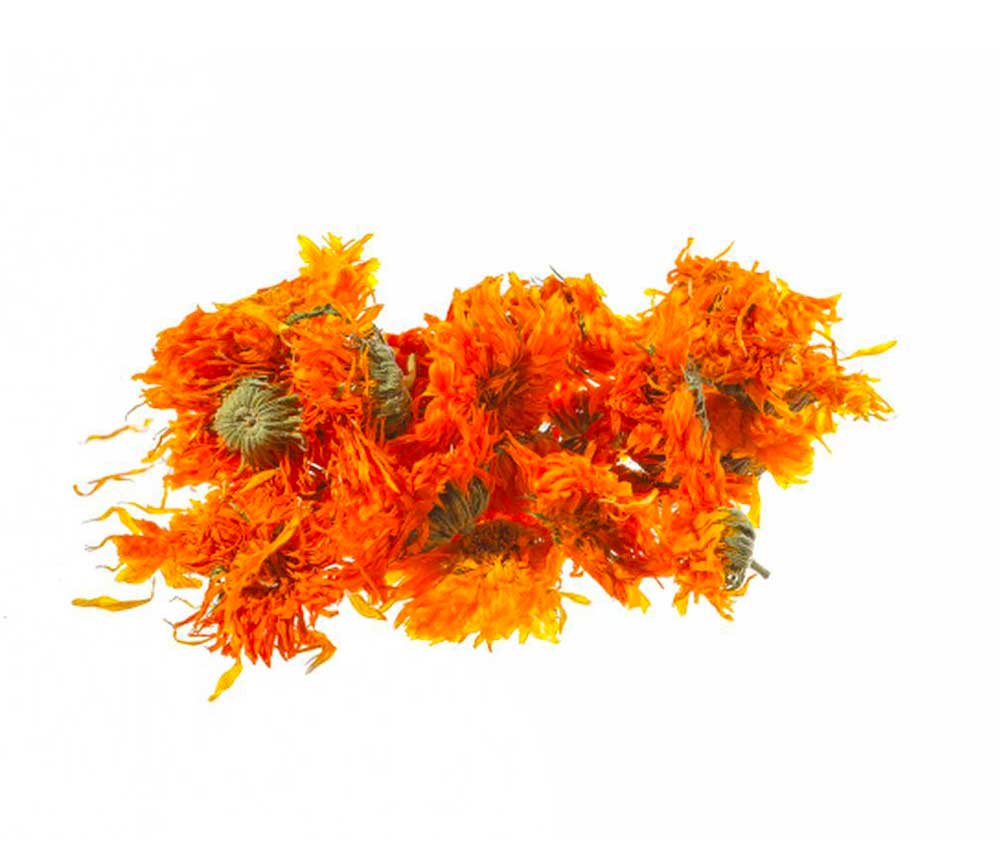 Native to southern Europe and parts of Asia, calendula is now cultivated worldwide as a popular item in home gardens as it attracts bees for pollination and keeps harmful insects away from other plants. The herb is an annual, growing to about two feet in height with vivid orange to yellow flower heads similar in structure to the daisy. The Calendula genus is native to the Mediterranean. The native American marigold looks very similar and belongs to the Tagetes genus.

Calendula was named by the ancient Romans, who observed that the plant was in bloom on the first day (Latin: kalends) of every month. They looked upon the plants nonstop-blooming as a symbol of joy, and cultivated it in their gardens to spread happiness. The regular supply of fresh petals and young leaves contributed to its frequent use.
Ancient Egyptians valued it as a rejuvenating herb.
Hindus used it to decorate temple altars.
Persians and Greeks garnished and flavored food with the flower petals.
The Germans added handfuls of the flowers to their soups and broths to add body, color, and strength, and hence the nickname of “pot marigold”. Europeans have also long used it to flavor soups and stews and to color butter and cheese.
During the American Civil War, doctors on the battlefield used the flowers on a large scale to treat open wounds. It proved effective as an antiseptic, staunching the bleeding, preventing infection, and speeding the healing of wounds. The practice continued by doctors during WWI.
Medieval monks prescribed it for bowel problems, liver complaints, and insect or snake bites.
Aemilius Macer’s 12th century herbal, which was published throughout the 13th and 14th centuries, recommended simply looking at the plant to improve eyesight, clearing the head, and encouraging cheerfulness (not a bad idea!).
During the 17th century, Culpeper advocated it to “strengthen the heart” and for smallpox and measles.
The Aztec marigold was highly esteemed in pre-Hispanic Mexico for its ability to heal many infirmities and used the flowers in many of their rituals. One historical account describes armloads of them being carried in ceremonies honoring their gods. Mayan priests washed their hands and faces with a tea of the leaves and flowers before calling on the spirits. It is still used in celebrations of the Day of the Dead when they are strewn over graves and home altars. Today, this once-exalted plant has been reduced to feed for chickens, giving a bright yellow color to the yolks and to the skin of the chickens themselves.

You can find Calendula in these itineraries: