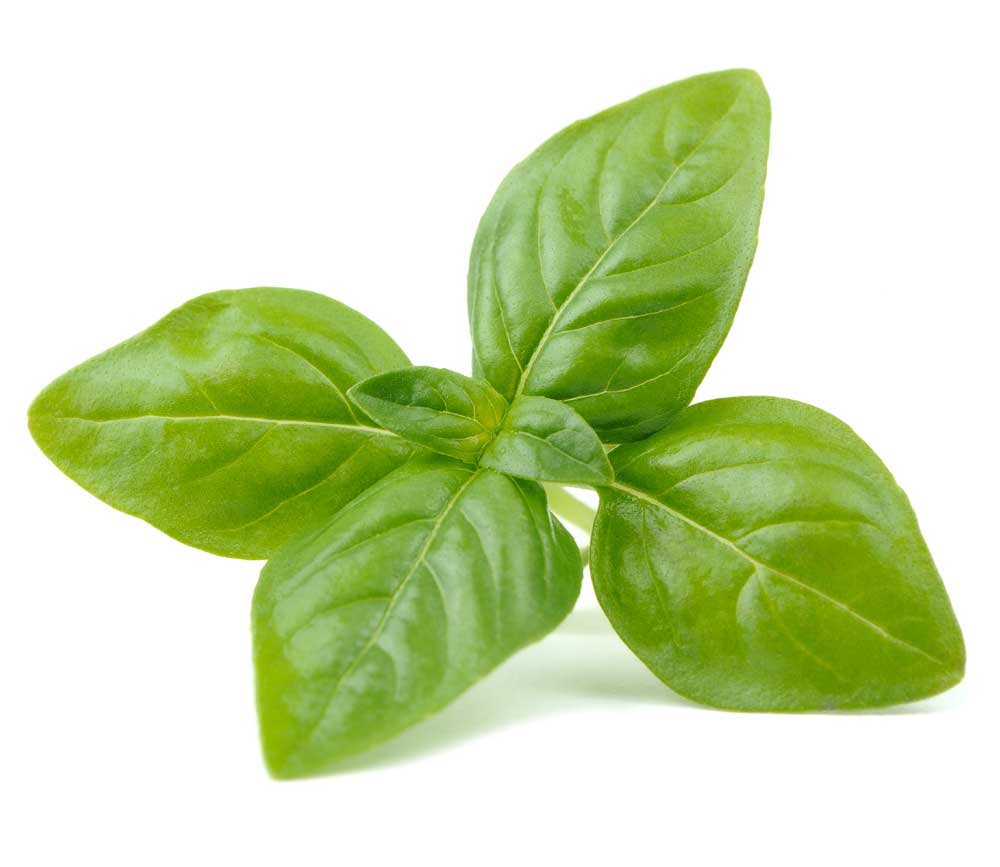 Native to India, Afghanistan, and Pakistan, basil is a strongly aromatic annual growing to about twenty to thirty inches in height. It has shiny oval leaves; a square stem; and small white, pale green, or purple-red flowers in whorls. There are at least 150 varietie, of this member of the mint family grown around the world for their distinctive flavour and essential oil. Each variety of basil differs in height, colour of foliage, and taste. Of the six common varieties of basil found in the US, sweet basil and dwarf basil are the most popular. The leaves and flowering tops are gathered as the plant comes into flower.

Long associated with death, basil was planted on graves in ancient Persia, Malaysia, and Greece. Today, the herb is still used at the altars of the Greek Orthodox churches.
Basil was introduced to Europe from India, where the leaves were often placed in the hands of the dead to ensure a safe journey to the next world.
The blossoms were scattered over the tombs of ancient Egypt as it was believed that basil opened the gates of heaven.
Ancient Romans used basil to relieve gas and to counteract poisoning, as well as a diuretic, and to stimulate breast milk production.
The herb was long used as a “snuff” to clear nervous headaches and congestion.
In Japan, it was used to treat the common cold.
In Jewish lore, basil was said to lend strength while fasting, even simply by holding it in the hand.
In Haiti, it is believed to belong to the pagan love goddess Erzulie, as a powerful protector.
Mexicans sometimes plant it in front of their houses to ward off evil. Some carry “lucky basil” in a pocket or purse to magnetize money or to return a lover’s roving eye.
In India, it is revered as a sacred herb of the wife of the god who preserves life. Holy Basil is so named because it is often planted around temples and courtyards in India.
In the 1st century CE Materia Medica, the Greek physician Dioscorides described the African belief that eating sweet basil checks the pain of a scorpion sting.
The 17th century herbalist Nicholas Culpeper reiterated the use of basil for scorpion stings and related this tale of a man who, after smelling basil, grew one of the beasts in his brain.
Like other herbs whose Spanish name begins with the Arabic prefix “al”, basil was likely introduced to Spain by the Moors.
Its name is thought to have resulted from the Greek word “basileus”, meaning king, signifying its place as a royal herb since only the king was allowed to harvest it.

You can find Basil in these itineraries: