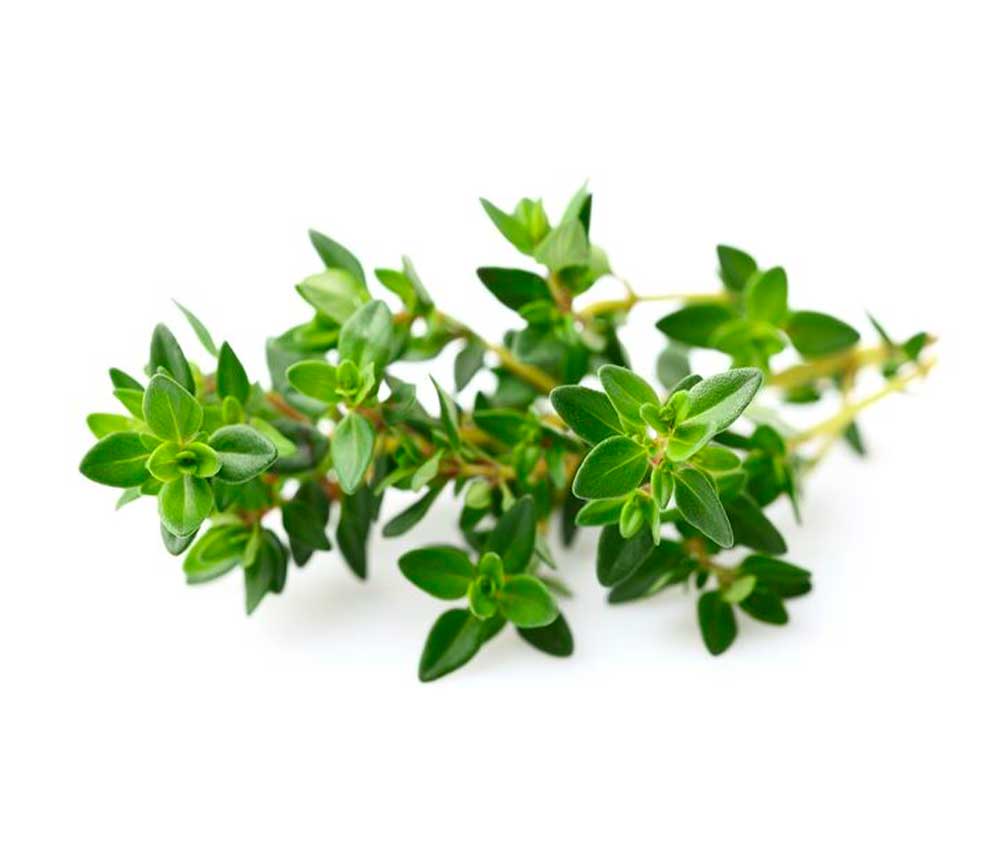 Thyme is native to the western Mediterranean and southern Italian regions, while the wild thyme is indigenous to southern Europe. It is now cultivated worldwide, preferring light, chalky soils. The plant is an aromatic perennial shrub of the mint family, growing to about sixteen inches in height and producing woody stems, small leaves, and pink flowers. Wild thyme is a tuft-forming evergreen herb, growing to a height of only three inches. It has square stems, small aromatic oval leaves, and spikes of bright mauve flowers. Garden thyme is the cultivated form of the wild thyme. There are many related species with each having a different volatile oil content. The aerial parts are harvested before and during flowering.

It is known as “mother thyme” because of its traditional use for women’s disorders.
Thyme’s fragrance has inspired poets from Virgil to Kipling; and it is particularly strong on the warm, sunny hillsides of the Mediterranean.
To the Greeks, thyme denoted elegance; and, after bathing, they would include the oil in their massage.
Its botanical designation may have been derived from the Greek word thymon, meaning “courage” as many of their traditions relate to this virtue.
Wild thyme received its botanical name from the plant’s serpentlike appearance. Pliny recommended it as an antidote for snakebites and other poisonous creatures and for headaches. The Romans burned the plant in a belief that the fumes would repel scorpions.Roman soldiers bathed in thyme waters to give themselves vigor.
During the Middle Ages, European ladies embroidered a sprig of thyme on tokens for their knights-errant.
A soup recipe from 1663 recorded the use of the herb, as well as in a beer to overcome shyness.
Scottish highlanders drank tea made from wild thyme for strength and courage and to prevent nightmares.
Its powerful antiseptic and preservative qualities were well-known to the Egyptians, who used it for embalming. It was also used to preserve anatomical and herbarium specimens and to protect paper from mold.
Sprigs were included in judges’ posies and clasped by nobility to protect themselves from disease and odour.
Thyme is the first herb listed in the Holy Herb Charm recited by those with herbal cunning during the Middle Ages, and it is a feature in a recipe from 1600 that “enabled one to see the Fairies”.
The English herbalist, Nicholas Culpeper (1616-1654), praised thyme as a strengthener of the lungs and prescribed it for children who had whooping cough. He also used it for internal bleeding and vomiting.
The 18th century Swedish botanist, Carolus Linnaeus, used the plant to treat headaches and hangovers.
In an Aztec Herbal of 1552, a plant identified as thyme was included in an elaborate remedy for nursing mothers whose breasts failed to produce a necessary supply of milk.
By the 18th century, thyme’s antiseptic properties were known; and its oil, thymol, was extracted and made available.
It was widely used as an antiseptic during WWI; but, when shortages of thymol developed, it was gradually replaced by other antiseptics. Thymol remains a key ingredient in the mouthwash, Listerine.
In the late 19th century, thyme was used as a disinfectant in sickrooms and to speed the recovery of patients.

You can find Thyme in these itineraries: