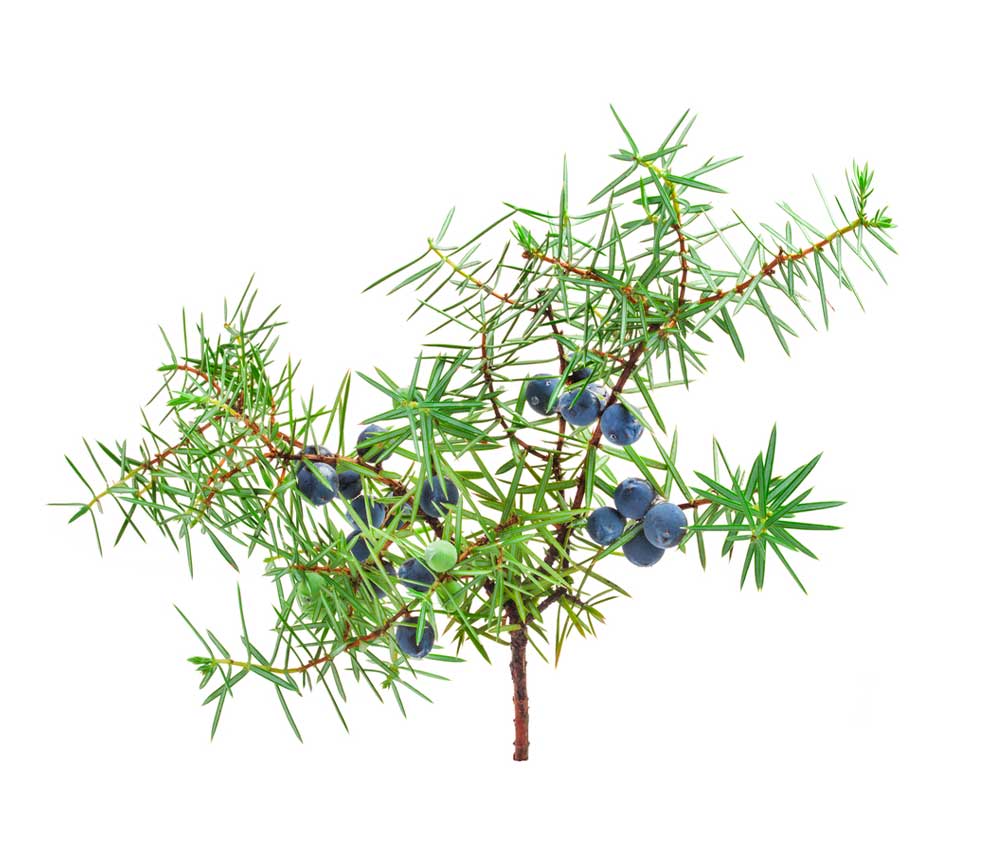 Juniper is found in Europe, southwestern Asia up to the Himalayas, and North America, where it grows from southern coastal areas to more northerly moorland and mountainous regions. The juniper is a low, prickly bush or shrubby tree that grows to between four and fifty feet high. It is a slow-growing coniferous evergreen with slender twigs and whorls of silvery-green, spiny needles. From late spring to early summer, it bears small yellow male flowers and blue female flowers on separate plants. It is cultivated mainly for its berries which take up to three years to ripen, changing from green to silvery-purple. These berries are borne only on the female bush and can be found in various stages of ripeness on the same plant. Their flavor is stronger the farther south the plant is grown. The berry fruits are gathered when ripe in the autumn.

Juniperus is the old Latin name for evergreen trees or shrubs.
Juniper is also known as genvier, the term from which the word “gin” is derived. The berries are used in gin production, leading to its distinctive taste.
Since ancient times, juniper has been used by every culture for purifying and ritual cleansing, especially in temples. It was often burned to ward off evil spirits and the plague. Its use by indigenous cultures is pervasive, and scores of scientific studies have upheld its historical use.
Several medicinal recipes survive in Egyptian papyri dating to 1550 BCE, including a remedy to treat tapeworm: Juniper berries five parts, white oil five parts is taken for one day.
Juniper has been used since ancient times by the Greeks and Arabs as a sedative.
In Europe 200 years ago, the juniper was used to strengthen the body of those who were sick and to maintain the health of the well.
In central European folk medicine, the oil extracted from the berries was regarded as a cure-all for typhoid, cholera, dysentery, tapeworms, and other poverty-associated disorders.
In North America, the Micmac and Malecite tribes native to the Maritime Provinces of Canada, used juniper for sprains, wounds, tuberculosis, ulcers (internal and external), consumption, and rheumatism. Their general belief was that juniper hardened the body and made it better able to fight off illnesses.
Native Americans in general preferred the Californial juniper (J. californica), the Utah juniper (J. utahensis), and the check-barked or alligator juniper (J. pachyphlaea). They used the berries in a different way by drying and grinding them into a meal that was shaped into patties and fried. The taste may not have screamed out for second helpings, but it did keep body and soul together and were easy to digest, as well as being remarkably good diuretics.
The Zunis made a tea from the toasted branches to relax the muscles before childbirth began and to speed the recovery after delivery. The Tewa tribes burned the branches in the dwelling of a woman who had just given birth. The Spanish Americans, who learned of the native plant from various indigenous tribes, advised that women drink a cup or so of the tea a month before their babies were due to assure a safe delivery. They also used the tea to treat an inflamed stomach and relieve muscle spasms.
The Red Cedar and other Junipers were used by most Native American tribes for incense in purification and ritual.
The Shoshone used a tea from the berries to treat kidney and bladder ailments, while the Canadian Cree used a tea made from the root for the same purpose.
In 1849 and 1850, the Asiatic cholera was epidemic among the Lakotas; and many died, while others scattered in panic. Red Cloud, who later became a famous Lakota chief, tried many treatments for the disease, including a decoction of juniper leaves which was drunk and used in bathing. It was reported to have been the cure.

You can find Juniper (common) in these itineraries: